We are glad to announce a game that most gamers have been awaiting for many years:

FLORENZA X ANNIVERSARY will be released in October! 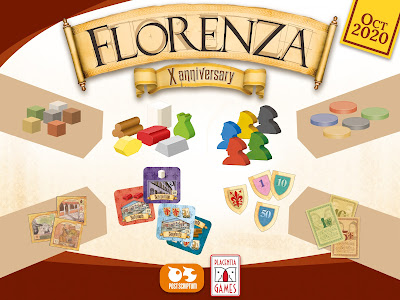 Originally released in 2010 and then reprinted in 2014, Florenza has a special place in the heart of many gamers who love complex resource management games, including us publishers, of course.
In this edition, in addition to new graphics and materials, we have also updated some rules, making them more elegant and taking a bit also from Florenza Card Game and Florenza Dice Game, both released after the original. We think it all resulted in a winning assembly, which will excite you more than ever.

Are you curious? Here’s the list of the main new features!