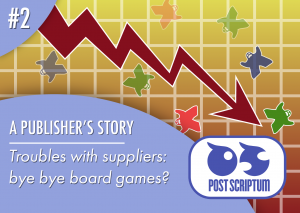 I thought that I was privileged because I had the chance to work from home every day, carrying out loads of projects, as usual, and I still think I am privileged. Of course, cancelling all the game fairs was a terrible blow for us, especially due to the lack of B2B meetings with clients, suppliers, and reviewers etc., however, on the other hand, the online sales rocketed and probably the number of players in the world increased too, with people approaching our hobby thanks to forced lockdowns. And to top it all off, Shogun no Katana’s Kickstarter Campaign had been really successful.

For this reason, I naively thought that the pandemic didn’t have such a big effect on our job. Well… 2021 brought me back to the sad reality. 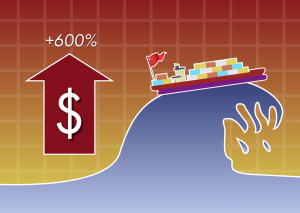 Probably, readers of a blog like this one have already read many posts on Facebook or Twitter where publishers or other industry insiders complain about this year’s productive situation, because everything is slower and more complex than usual and because shipping costs from China have increased unpredictably (in the scale of 500/600%), with terrible consequences on publishers’ business plans, especially in relation to their Kickstarter campaigns.

This alone would already be a terrible news, especially because the world of games publishing is mainly made up of small companies (even though in many cases they don’t look small), that would struggle to take such a sudden unexpected blow, and it might be impossible for them to recover. In our case we don’t know yet how things will go: considering that Shogun no Katana is not ready yet for shipping, and that quotes change on a daily basis, we don’t know what the future holds for us. We know that we are a solid company and that we can absorb higher expenses than what we had predicted, however, we won’t put our mind at ease until we know how much higher the expenses will be.

Obviously, this solution will have consequences on our games in the coming years. At the moment we’re working on three new games that are going to be launched on Kickstarter and I can’t hide that I am a bit more nervous than usual (as if I wasn’t nervous enough in general, when launching a new campaign).

Why don’t you produce in Europe so?” You might wonder. First of all, it’s not always possible for technical reasons, because some components (such as miniatures, but also many more) are created only in East Asia. But it is true that we could import only those components and print everything else here, but here’s the side effect: because producing in China is difficult, all the European suppliers at the moment are overworked and have ridiculously long printing queues. For example: to carry out our third-party consultancy work we have been working closely with different printers, one in particular who prints at least 30,000 boxes a year for us and had guaranteed certain delivery times for 2021 if we agreed to print more (which we did). During the first quarter they actually met the deadlines, but in April they emailed us communicating that they would push the deadline back one month. This implied a considerable change in our plans, but nothing too drastic, because we had planned our productions well in advance and we were ready to face this type of issue. The problem was that a week later they pushed back the deadlines one more month, saying that they weren’t accepting any more orders for 2021, except for their main customers, which included us. To sum up, we ended up closing all the productions of the year with our main supplier by July, which had never happened before.

The problem is that, usually, our consultancy work receives more requests in the last months of the year, with the request of receiving the games by Christmas. Actually, our main strength has always been being able to ensure extremely short turnaround times, and making “miracles” which would otherwise be impossible. It took us years to set up a quick and efficient production chain, based on the fact that, putting together the works of many clients we have more commercial power than what they have as individuals. We still have this strength, because we also work with other providers who are interested in receiving big orders like ours, but it is obvious that any change to normal routines imply extra work, and it creates a queue for them, who, in turn have to increase their turnaround times. And of course all this has an impact also on the production of new games for our catalogue.

This is the sorest point because planning future publications is already very complicated and risky, especially when you have to choose the print run, and to this we had already met further difficulties due to the impossibility of meeting our partner in fair, but now we aren’t sure of when our games can reach the destination or how much it will cost to produce them.

Even on games that were planned and that I considered “done and dusted” there were delays, because all (all!) the providers say that paper provision is more difficult and more expensive than it has ever been, I tell you for sure that this situation is unprecedented, certainly in my 16 years of activity with Post Scriptum.

Publishing a game is long and difficult, and often it’s also very stressful. You have to put together the work of different professionals, taking care with passion and precision every detail of the rules, the art, the materials, the promotion, and this year we face the unprecedented risk that this work is jeopardised by external factors that we could have never foreseen.

For what concerns Post Scripum, I can ensure you that business is moving forward and that our games will still be published, but please note that for every game that we’ll publish in the coming months there should have been at least another that should have been published and is still waiting for better times.

What pushes us to go forward is the enthusiasm that you show for every Kickstarter campaign and for every publication, so please continue supporting us, and all of your favourite publishers!