GAME ALONE: how do you develop a boardgame’s solitaire mode? 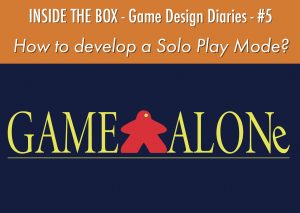 It was 2016 when, for the first time, we explored the Kickstarter world with Kepler-3042, by Simone Cerruti Sola.
Since the very beginning we had to think about new solutions to promote the game on the crowdfunding platform, such as the exclusives for the most affectionate backers and the most innovative and creative stretch goals. These included the solitaire mode, which has become fundamental to expand the range of options that we want to offer to our players, and by now, it is a must for all our games that are thought for expert players.
More and more often players need to live boardgames without having to be bond to other people. With the pandemic this has become even more important, and we noticed that for board games enthusiasts who want to play by themselves, solo play mode is the first choice, commonly preferred to videogames.
Often, players, especially for more complex games such as our Placentia Games, use this game mode to study rules and to get ready for when they play in groups. 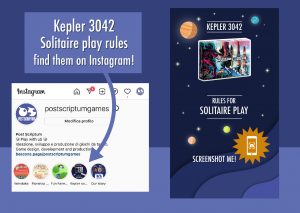 Let’s get to the most technical part of the article: what is our procedure to create a solitaire mode? Since the beginning, we’ve always tried to understand what type of experience we want players to live, what are the pros and the cons and what solutions make the experience compelling even without a confrontation with other players.
So far, we’ve found 3 ways:
1) Assigning tasks for players to create pressure during the game: Kepler-3042’ solitaire (entirely designed and developed by the author, Simone Cerruti Sola) is structured this way. In a game that is intrinsically tight, with few rounds, he chose to give the gamer target points objectives that get increasingly more difficult, compensating the increasing amount of requests with the possibility of starting with additional resources according to the results of the previous games.
2) Evaluating the result according to the number of points obtained in the solitaire game. We believe that this is the most dangerous way, it risks to be not engaging enough and to leave the player unsatisfied or lacking the sense of victory. For this reason, we used it only in Florenza Dice Game, which is intrinsically suitable to this mode, but we made sure we would also add a good level of variety and unpredictability adding a ghost player who chooses the dice and advances on the Captain and Bishop’s paths, making it impossible to always play the same way. This mode’s basic mechanisms were initially designed by Mario and then tested and developed by everybody, in collaboration with the author Danilo Festa.
3) Developing a real AI that actively impacts the game, acting like a human player. Below, we are going to talk about this option.

The most interesting and challenging choice for game developers like us is to develop an AI: you have to find clever solutions to make the bot as interactive and compelling as possible, similar to a real opponent. It has to be structured in such a way that it can interact with the game sets, being Florenza workshops or Wendake’s territories, all with practical and fluid solutions, that don’t force the players to manage a huge amount of components. 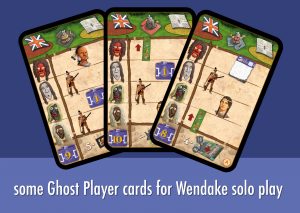 Wendake’s bot was designed by Tambu, who created 4 Ghost Player cards with different backs and fronts. 3 of them are drawn at the beginning of a game and placed in random order. This makes it possible to have a different opponent for each game. Coherency of the actions carried out by the bot in its turn, is guaranteed by the fact that each round a Mask card is drawn (already existing in the multiplayer mode for different aims) and this determines what action row should be considered. This mechanism made it possible to balance the bot’s moves in a fair, always different and realistic way. 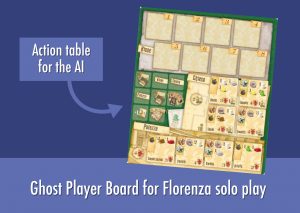 For Florenza X: Anniversary we made a further step forward, offering the possibility to face more than one bot (also with different levels of difficulty) at the same time. Mario was the one who had the initial idea for this mode, and put forward the idea of designing a Ghost Player card, placed on the back of the players’ board. The balancing of the actions was first based on Matteo’s calculations, which we discussed in this post, and then on the many tests that the three of us carried out individually and separately. We believe that the result is a gameplay that can come off as coherent to the main game, but also unique and fun.

Another aspect that we implemented in Florenza: X Anniversary, which you will find in Shogun no Katana is the option of adding a bot to a multiplayer game, in order to offer an even wider range of possibilities. This option was especially appreciated by couples who often play at home, giving them the chance of playing with “3 players”.

Well, for Shogun no Katana there’s much more: a challenging and structured bot, with 5 difficulty levels, and a campaign mode which we find fun and engaging. It will be a 14 chapters journey, from the foundation of your school to your affirmation as smith masters, even going through wars.

But this will be the topic of another episode of Game Design Diaries!

Are you curious about Palacentia and Post Scriptum game development? This and much more on our Telegram channel!