How is a boardgame manufactured? 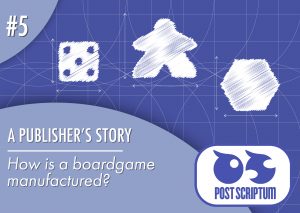 A few months ago, we had the chance to tell you about the difficult production situation in the board games universe (we talked about it here!) but many of you asked us more generic questions about our production work.
Here’s a series of FAQs we received during the life of Post Scriptum.

1) When does the actual production work start for a game that is being developed?
We start the printing process when the game is basically complete. It can happen that the rules’ translation isn’t finished, but it is quite a rare condition. But it can happen to send some components to be manufactured in advance, such as, miniatures, or wooden parts, which require a longer printing process in comparison to other material, and are always the first things that are completely designed. On the other hand, the carboard parts need more time to create the perfect design composition (and, among other things, they often represent precisely the wooden figures and this is another reason why they must already be definitive).

Sometimes, we had to ask our suppliers to replace a file very close to the actual printing day, maybe we realised there was a mistake, but luckily this hardly ever happens! 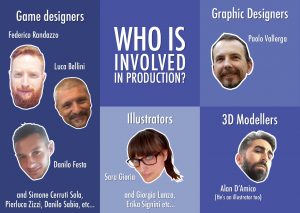 2) Who is involved in production?
Let’s start from the author, who normally doesn’t deal with publishing. However, we want them to have the chance to give their opinion, and to be able to follow every step of the process, giving their approval, in fact we have added this condition to the standard contract.
Then, first of all, there are two professionals who are involved: the one who deals with illustrations and the one who deals with the design.
Illustration is a very delicate topic: the most wanted artists are in high demand, and not everybody is able to create images in every desired style. In our case we have an in-house illustrator, Sara, who illustrates many of our works, but she can also choose different artists if the game requires a different style, or as it often happens, she simply doesn’t have time to illustrate all the games. Sara’s opinion, as a matter of fact, has been fundamental for Mario, Tambu and Matteo to choose Giorgia Lanza as illustrator for Shogun no Katana.
The illustration work starts from a concept that has to be developed, and this process requires at least a month of research, in which we keep on evaluating new drafts.

Talking about the graphic design, i.e. the creation of all the elements which don’t need to be drawn, such as icons, and the layout of cards and rules, we generally work with Paolo Vallerga, from Scribabs. Graphic design requires a lot of experience in the board games world, because, on top of the appearance, you need to keep into account the functionality of the components, the icons’ readability, the clarity of examples in rules books… it is a particularly important aspect of the game’s production, so much so that we organise specific playtests to understand the feeling of the game using its components and the design. For some specific cases we rely on 3D modellers, to create miniatures, like in the case of Alan D’Amico for Shogun no Katana’s characters.

Then we contact both Chinese and European suppliers, according to our requirements, to create all the materials.

3) How are all the parts, such as the cards and the punch-out sheets created?
Without going into details, as it’s not our job, we can say that cards are printed onto very big sheets, which are then cut out by a grid of blades. The grid is structured to have a standard size, like poker cards.
Punch-out sheets are made by cutting cardboard with custom blades, which sometimes are handmade.
All materials are then entrusted to the packaging company, and in the end, everything is sent to the warehouses who eventually will send them to final players (in our case, our Kickstarter’s backers) or to distributors or specific shops.

Do you have any more questions for the Post Scriptum team? Write to us on our social media pages and subscribe to our Telegram channel to be updated on all our blog articles!