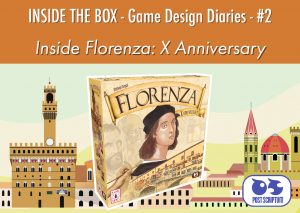 It has been almost a year since Florenza X Anniversary was published.

Florenza’s third edition represents the crown of everything we had wished for this game: Flawless materials carefully looked after by Tambu, the illustrations have been touched up by Sara, and most importantly, the rules have been updated, to reach a more fluid and seamless experience. Every change we have made to the game is the result of long thought-out research, that started 10 years ago, when we were only Placentia Games’ consultants, long before we acquired the publishing house.

Now that we had the chance to revisit what we consider a jewel of a eurogame, we mainly focused on smoothing the rough edges, such as the rules that were too complex, game actions that weren’t interesting enough, and the general game balance, in order to speed up the game experience.

Our follower Alain Rameau, a.k.a. karamo, did an excellent job which you’ll find on BoardGameGeek, and that we gladly share: a list of changes between the current third and the second edition. Thank you very much karamo!
We decided to use this document to review our revision with a clinical eye, focusing on every little change, to analyse and motivate every design choice.

Note: we strongly advise that you read at least the latest version’s rules in order to have a clear idea of the game flow and of the different elements that make it up. 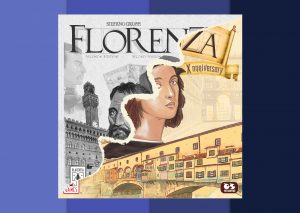 1) Why did the rounds decrease, from 8 to 7?
This is easy: after all the changes that we’ll list below, we realised that it was possible to fulfil all the strategies in a lower number of rounds, shortening the playing time and making it “tighter” just the way we like it.

2) Why did we reduce life in Florenza, from 7 to 6 rows?
This was due to necessary balancing, considering the decreased number of rounds. And to avoid that Artists could stay in play for the whole game.

3) Why did you change the beginning of the game?
In the first two editions, at the beginning of the game, players could choose between 2 different Workshops from a limited pool, and during the first round the Collect Income phase was skipped. All this, according to P.S. Martensen (in this case Mario), represented A HORRIBLE EXEPTION to the game flow.
We decided to simplify the preliminary choice of buildings, and reinstate the Income phase, in order to even out all the rounds. We simply reduced the number of Fiorini available at the beginning of the game, and revisited the costs of some of the buildings, so that the building purchase limit is determined by actual resources and not by a quibble in the rules. Genius, isn’t it?

4) Why did you change the Palace and the Church?
After playing a great number of times, we were aware that these buildings were not used properly: often they ended up being completed only towards the end of the game, if there was time and available resources, without adding anything to the game. We changed it in such a way that they wouldn’t just give Victory Points (VP), but that they would also generate income every round, making them interesting from the beginning. This mechanism was inspired by an idea of Danilo Festa’s Florenza Dice Game. You’ll notice that the Florenza universe (Florenzaverse) games have been a great inspiration for X Anniversary.

5) Why did you change the Captain of the People?
Considering that we have reduced the number of Workers (who became Kinsmen in this edition) available to each player, the previous Captain of the People, who used to steal Workers from opponents, would have definitely been too powerful, so we took away that power, leaving the power of detaining a Character. However, now it’s the Captain of the People who chooses the extra Resources that will be assigned to all the players at the beginning of the rounds, leaving a margin of indirect interaction. This idea was “stolen” from Florenza – The Card Game, and was a Stefano Groppi‘s original content which we liked very much.

6) Why did you change the Bishop?
Some of the bishop’s rules weren’t very polished, and it was too different from the Captain of the People, which resulted in ANOTHER HORRIBLE EXCEPTION to the game flaw, and P.S. Martensen (again Mario) found it unforgivable. We decided to simplify it and align it with the Captain of the People, adding the VP grabbing to make it more interesting to get.

7) And the preachers?
We found them weak, so we created a series of effects that are activated when selected. 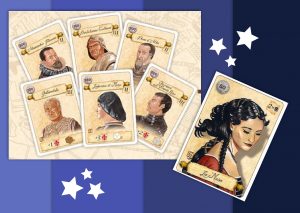 Yes, without turning the game upside down, we implemented a few ideas that had been introduced with some promo cards, remodelled for the occasion: The Captains of Fortune, totally revised and insipired by those in Florenza Card Game: War & Religion, and the Muse, essentially unchanged. We also added the Special Crests, which offer extra incomes to who completes an Artwork.

9) Why did you change the turn order?
This is the rule that P.S. Martensen liked the least (in this case all of the components). In the previous versions it could happen that some players were forced to play last or second last for rounds that were considered decisive for the game, without having the opportunity of reacting. We decided that the turn order should be based on the number of VP that a player has achieved in that moment.

10) Bottom line?
Finally, we created the solitaire play, which we really like. But this will be the topic of our series of posts about Game Design!

Now Florenza: X Anniversary is fresher and more intuitive than its predecessors, and with a more reasonable game duration (with 5 players we used to run over 3 hours, it is not acceptable anymore). 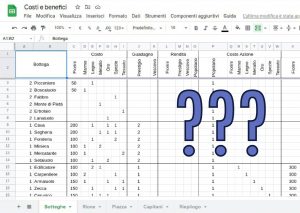 Obviously, in addition to the changes described above, we also tuned the balance for many buildings and characters. Here is where Matteo comes to play, developing complex excel tables to keep into consideration every single mathematical factor. But this will also be the object of another post!

We hope that you enjoyed this dive into a game’s design, let us know on our social channels if you want to look more into the game design of another of our games, we’d be happy to tell you about the behind the scenes 😊
And subscribe to our Telegram channel not to miss any of Post Scriptum’s articles!

Tagged Florenza, Inside the box