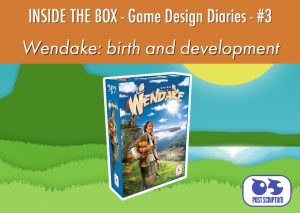 It was December 2015 when we invited for a simple playtest night the author of a game with whom we had a contract and with whom we were having troubles.
The development process was taking too long and we were stuck on some aspects, so the author offered to test another of his prototypes. “I wasn’t sure to bring it here, I was afraid that then you’d want to publish this game instead of the other!” commented the author. These words were prophetic, because, at the end of the test we were so excited about the game that we gave up the previous one to take on this game!
The author was Danilo Sabia, the game was the first version of Wendake, one of Placentia Games greatest successes.

What convinced us so much of this eurogame with such a peculiar setting?
Danilo is passionate about Native Americans’ history and about Avalon Hill’s complex products, and he developed a solid thematic game, whose underpinning mechanism was original and funny.
Wendake has always, since the very beginning, transpired the spirit of the Wyandots, the native population of the Great Lakes, who, opposite to the more popular people of the Southern grasslands, were sedentary and well integrated with these beautiful territories.
Compared to Danilo’s prototype we didn’t make many substantial changes, since the game was already working well (you remember how to play it, don’t you? Have a look at the rules on this link!).

Fun fact: some reviewers accused us of introducing the Masks track after finishing developing the game, to make the numbers work, and this is quite funny, because this aspect of the game has always been there, (since it is one of the characteristics of these people) and it never changed 🙂

Instead, our most important changes were the following:

Danilo, being a euro gamer, hates chance and luck. He had developed a fight system inspired by Avalon Hill’s Advanced Civilization, which was very deterministic. It was an extremely complex system, in line with that famous game publisher. After many tests and a lot of work, Matteo had the perfect intuition to find a system that would be simpler, but without distorting Danilo’s initial idea, to make sure that game is not risk-ridden.
Please note: We would like to specify that in the beginning we had some doubts about the direct interaction of the players, but we soon accepted it, both to be coherent with the setting and because it is not the central aspect of the game, in fact, if your style is too aggressive you’ll hardly ever win. 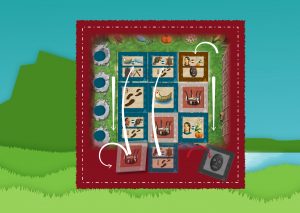 The development of the player board

In the original version, the evolution of the tiles on the player’s board used to be more complex and difficult to achieve, because it involved sacrificing the player’s canoes. Mario and Matteo thought that the growth of the player’s board was a strong point of the game and had to be more straightforward, without any limits. Therefore, it was decided to allow for the tiles’ evolution since the beginning: in the Restore phase, when all the tiles move down, the players acquire a more powerful action tile, generating an immediate growth of the game.

The number of rounds was reduced from 8 to 7 and the halfway scoring system, that interrupted the game, was removed (it took a lot of Tambu’s work for this to happen).
Moreover, the victory system was made more variable: at first the scoring tracks pairs used to be fixed (mask points+military points and economic points+rituals) now it is possible to create random scoring pairs.

Once we had almost reached the end of the development, we asked Danilo to include a secret scoring system which could make the end of the game more tense and less certain. It was him who thought about the turtles system, small targets to meet during the game to earn extra points.

When the game was almost completed, it only needed a couple of more things: the tribe cards, to create variability, the swap tokens, that make it possible to swap the position of two of the player’s tiles during the game, to unstick a possible stall situation, and the solitaire play, created by Tambu, which we will explain in a separate article.
What else can we say? The game was solid, exciting, fun. It was all properly put together and coherent with the setting. 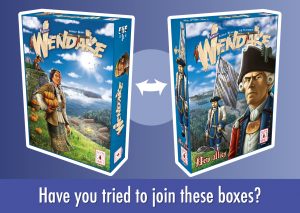 What about the expansion?

Wendake had been a great success, so we asked Danilo to create an expansion. For that occasion, we decided to extend what in the original game was only mentioned, meaning the presence of the French and the English who, during the Seven Years’ War, fought for the territories. At the same time, Danilo took the chance to implement new game dynamics, bringing back the interaction amongst canoes in the lakes, which had been eliminated in the original game (even though we must say, it worked in a different way).
For the expansion we needed a new resource that could be integrated with the basic rules which could characterize the gameplay: Danilo said we could add rifles, which could be obtained trading pelts with the European people, exactly like it used to happen historically. The expansion too has great coherency with the setting, and it emphasises more military and competitive strategies.
Wendake has been a source of great pride, we got excited when we tried it back in 2015, we were afraid during the Kickstarter campaign in 2017, but then we met all the stretch goals, and we’re still very proud of it. Danilo’s work fascinated us and allowed us to discover places and historical periods that we didn’t know.

If you feel the urge to play another game of Wendake (and you haven’t got a copy, you can still buy a copy here) let us know if you agree with the changes that we made, and follow us on our Telegram channel, for any update and to talk about this and the development of all the Post Scriptum games!