Can a game be objectively good? 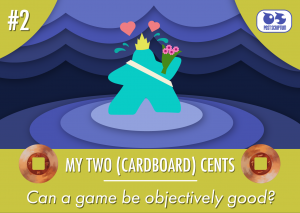 In this second instalment of our blog’s opinion segment, I would like to start to talk about a topic that in future will probably be a recurring one, which is the relationship between gamers and board games insiders, dealing with different point of views. In particular, on this occasion I would like to tackle the topic of how the perception of the game can be influenced more by a group of players than by its objective qualities, and about how important it is to keep this in mind when developing a new game and when we interact with the general public.

This makes me think about an old Facebook discussion among Italians who were talking about some party games with secret roles, deductions etc., I’m sure you know what I’m talking about. 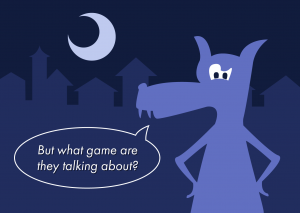 In the post a gamer was advising against game “X” because he thought it was broken and two experienced role-play and board games authors were explaining that that wasn’t the case, while it was actually true for games “Y” and “Z” which the player thought to be impeccable. This started a dialogue between two parties who were in complete and utter disagreement. The authors were giving technical reasons about what is a bug and what is not, and the player was answering talking about his group of gamers, that was made up of very expert tournament players, which included and Italian champion, and that the authors didn’t understand anything. It was one of those situations in which everybody loses their patience, feelings were running high, and they ended up blocking each other. In short: the internet.

As an insider, I perfectly understand the authors, because their arguments were objective and it is right for people like them or me, but also for game enthusiasts, to know them and to be able to distinguish between a well-made game and one that has technical problems or that “hasn’t aged well”.

It was also clear that the gamer wasn’t a troll, he was just bringing his first-hand experience to the table.

It is true that the authors were 100% right when talking about the first game: the gamer found it broken after playing it only once or twice and it was clear he didn’t fully understand it (knowing what game they were talking about, I know that it does NOT HAVE the game design issues that the player was claiming). Things get a bit more complex in regard to the other two games that the player liked and that the authors found unacceptable. The gamer stated that “you just have to play them well, with expert gamers who make the right moves, and the games work perfectly fine”. Now, as publisher and developer I know that a good game CAN NOT work only if gamers play in a certain way, quite the opposite, it is an objective issue. But the fact is that if those gamers played that game dozens of times and they keep playing it, they clearly enjoy it, and this is a big deal (especially in an internet discussion).

In brief: the experts’ objective arguments are often very valid but when we’re taking into consideration gamers’ choices we mustn’t make the mistake of underestimating subjective reasons, because, at the end of the day, whoever plays a game generally wants to have fun and kill time. Therefore, games creators, while doing it because it’s their job and having fun doing it, should always take into consideration that they’re doing it for the gamers.

Of course, it’s our duty to try and publish games that are well tested, balanced and most of all not broken, but as I’ve often invited gamers not to be too elitist, I equally invite us creators not to lose our gamer spirit, especially when talking about party games, perhaps old ones, that are still having great success all over the world.

While I can see the objective limits that the authors mention, even I regularly play at least one of the games that were mentioned above, with great enthusiasm, and I enjoy it. It’s true that, like in the case of said gamer, my group of friends has always been fundamental for those dozens of games to succeed, and I’m aware that in different gaming room I can’t even suggest playing it.

Obviously, I’m not saying that the two authors were wrong in this case: in fact I agree with them on all of the three games, however, I’m not mentioning their names, nor the games titles, to highlight that I’m not referring to this specific episode but to the idea that as we say “to each their own”, every gamer has their own taste and the same is true for group of gamers. Personally, I see this with the game Citadels, that many consider a filler, but in our gaming club it never lasts less than one hour and a half, we rack our brains trying to unveil all the roles. What was the author’s intent? Did he take into consideration all the different interpretations? How does he play? I’m tagging him right away, let’s see if he answers! 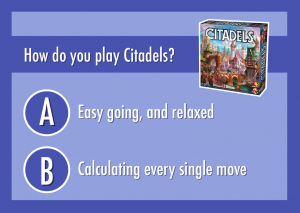