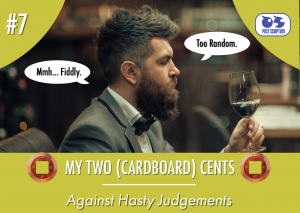 After some weeks we’re back with our blog’s opinion column, with an article that criticizes gamers. What can I say, we are people pleasers!
Actually, of course, we talk about a small group, i.e. those who can’t wait to tear a game to pieces as soon as they play it for the first time, sometimes not even finishing a game.

Of course, sometimes it happens that bad “broken” games are released. It has always happened, because since the beginning of this profession there has always been a race against time, however, recently the problem has been getting increasingly worse. Sometimes, short turnaround times force publishers to rush and go to press (*) compromising the design, the ergonomics, the quality of the materials or the game design.
Or it can happen because not all publishers are that good, and they can make mistakes. It can happen repeatedly, as you have probably seen on a few occasions.
As I have already written several times, publishing is a complex job, made of thousands of stages. Without even considering administration or sales, which also take a considerable amount of time and huge efforts (but are common to all the businesses), we must say that the creation of a game requires so many different skills, that have to perfectly combine together. Usually, it puts together the work of many different people, who sometimes speak different languages, who need to be coordinated well, because even one single mistake could become a problem for the final product.
Of course, it is not an excuse: if the product is really broken, it has an unintelligible design, or it is made of awful materials, no doubt that the work of the publisher was poor. I can think of many of these instances.
But every so often this is not the case… 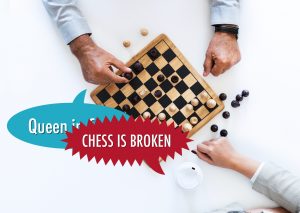 Well, sometimes the problem is not with the game but with the user. Often players are anxious to review a game because they are going to get another one soon, so they hasten to tell their opinion, after one game, at times not even finishing that one. It is true that this kind of gamers usually have a lot of experience with many played games, because they are eager to play one game after the other, but it is possible that this kind of experience translates into a need to criticize rather than actual competence to do it, especially when we talk about games that are critically acclaimed, especially if they judge on the basis of first or even unfinished games.
It might happen to the most passionate gamers who end up in the vicious cycle of “board games are my passion -> I want to try every single one of them -> I want them to be more and more perfect and cool -> I like one out of ten -> I’ll play the one that I like over and over again, for the rest of the games I’m going to complain on social media, because I’m a gamer and talking about it is my absolute favourite topic.” I know that these dynamics are also common in other fields, but I believe they are never particularly positive. To be clear: gamer’s feedback is extremely valuable, and I’ve often taken it into account when developing a product. Sometimes, though, it looks like criticisms emerge out of a desire to show off one’s (supposed) knowledge.
I’m going to make a couple of examples with some of our games to explain better what I am referring to:

In conclusion: I believe that we (the publishers) should of course be careful to publish products that can satisfy our passionate audience, but the passionate audience should also be careful not to rush into hasty reviews.
This topic is connected to what we wrote in this post about demos at exhibitions, especially to who believes that “playing for half an hour they can evaluate any game”.
No! I mention my games because I know them, but I can assure you that neither Kepler nor Wendake (or any other Placentia game) can be evaluated after playing them for half an hour.
Play them properly, give them the chance to win you over. I can guarantee that they’re worth it!

(*) sometimes, even we have given in to time, but only for some minor aspects of the games, something that we considered of little importance. We have always been completely satisfied with all the products that we have actually published. We have pushed back the publishing date of a game more than once because we thought that the game wasn’t ready.