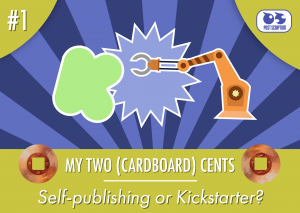 Here in Italy, self publishing is widespread: in many gaming fairs, it’s common to see a lot of self-publishers who present (and try to sell) their games. While speaking with them, I often heard that self-publishing is somehow virtuous, while Kickstarter is a sort of evil shortcut. Having experimented with both traditional self-publishing and Kickstarter in my career, I think I’m qualified to pitch in… and so I will 🙂
In my opinion, the idea that investing from your own pocket is brave and that turning to Kickstarter isn’t, is deeply flawed. From personal experience, I can assure you that Wendake campaign (only the campaign, not considering artwork and all the other aspects of the game edition) cost more than the entire production of our first game BauSquitMiao and took many, many more hours of work… And Shogun no Katana has so far greatly exceeded Wendake! Of course, between them are 15 years of experience, much more attention to detail and the individual products are VERY different. But if we had wanted to consider launching the most famous, pink-boxed game in Italy on Kickstarter, it certainly would have cost us much more than making it as we did. The fact is that nowadays Kickstarter has unwritten but ironclad rules that cannot be ignored. ‘Homemade’ self-published games are often targeted at a casual audience, sold at non-specialist fairs and markets where you’re more likely to meet a family than an expert gamer. These buyers’ needs are certainly much simpler, and it must not be underestimated that they can hold the product in their own hands; they’ve just played it and, if they enjoyed it, that’s all they need to make the purchase.

On Kickstarter on the other hand, it’s a whole different ballgame. You have to convince passionate people who live and breathe games to give you lots of money months in advance, to pick your project above the many others. Obviously, this is possible, but it requires months and months of work and a lot of money. Around twenty people ultimately reporting to me worked on the Wendake and Shogun no Katana campaigns, not including the play-testers. I worked on more than 70 games (only counting the actually completed ones) and without a doubt Shogun no Katana was the most complex and difficult to develop. The process of turning out an excellent game is already long and difficult, but one that gives me the utmost satisfaction. Convincing more than 2000 people to support the game without having even opened the box however was laborious and exhausting and cost me stress and sleepless nights as had only happened twice before… And yes, you are guessing right: it was for the Kickstarter campaigns of Kepler-3042 and Wendake.

So, I think I’m allowed to write that in my opinion, you need to be braver to launch on Kickstarter than to self-publish in the traditional way. In fact, you need to be more reckless. And it’s worth saying that I don’t mean this in a positive way. You should think ten, a hundred, a thousand times before you launch a campaign! 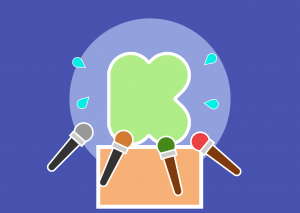 It’s by no means a shortcut, rather it’s an amplifier that boosts everything – visibility definitely, but also hassle. Even just the number of hours you’ll have to dedicate to replying to comments and messages is a lot more than you’d expect, I can assure you. And the replies have to be just right, or you won’t be forgiven.
It’s true that a success would have a wider reach, but so would a failure. You don’t really want to make a bad impression in front of everyone, right?

Moreover, and most importantly, Kickstarter exacerbates the main problem of self-publishing – the lack of a publisher to filter the products! The game that seems so fun to you and your friends may not be quite so entertaining in reality. And your cousin’s illustrations that you like so much might seem ugly to the majority of potential backers. Not to mention that without the right contacts with suppliers (especially when it comes to logistics), you could end up getting your figures wrong and so unable to produce the requested run without losing out.

So, it begs the question, has Kickstarter completely lost its spirit of support to those who want to realise their dreams and become but another tool in the hands of those already involved in games publishing?
Well … More or less yes: it has certainly lost it for people who want to present their project from 0, as a real dream, and hope to raise capital to start making it happen. It is still a valid springboard for those who are able to tackle the campaign exactly as a professional publisher would (and there are some striking examples about this), but this is not free, as written above. Kickstarter is certainly an essential tool for companies like ours, which need the visibility guaranteed by a successful campaign to make their projects known. From this point of view, Kickstarter actually maintains a part of its original purpose, because if one of our games failed on the platform, it really couldn’t be realeased… And this would be a disaster, for us, in spite of those who say that “Kickstarter is now just a presale and you don’t risk anything”.

At the risk of seeming repetitive, to conclude I’ll write it clearly once again: if you want to self-publish, don’t delude yourself that Kickstarter will make the task any easier and will flood you with money, because it won’t happen. In my opinion, self-publishing on Kickstarter without experience in game development (or business) is a terrible, terrible idea. I certainly don’t say this to get you to hire us to back your campaign. We’ve turned down many people who have already asked us this, because it’s very lengthy, very expensive work that needs very long-term planning. However, feel free to ask for advice.
But I warn you not to expect encouraging replies! 😉 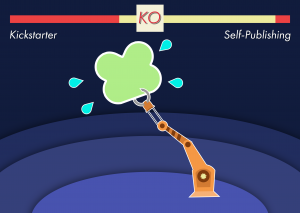