Who is P.S. Martensen? 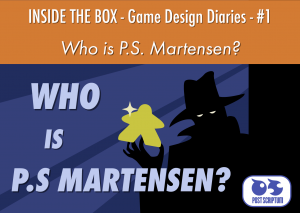 In the list of Post Scriptum and Placentia’s authors there is one name who has worked on all the latest productions… just have a look: Shogun no Katana, Radetzky: Milano 1848, Florenza: X Anniversary Edition…. These titles all include a mysterious signature;

Who is P.S. Martensen? Why do we believe in them so much to entrust them with all our latest games?

Let’s lift the veil: because P.S. Martensen is us! Unexpected, right?

P.S. Martensen is the nom de plume that we chose for our work as authors, carried out by Post Scriptum’s partners, Mario, Matteo and Marco “Tambu”.
It’s the name that we actually chose to differentiate our publishing work from our game design effort.

Since the beginning of Post Scriptum we’ve always been particularly meticulous in the development our games, both for our productions and when we were working as advisors. As time went by, we realised that our job wasn’t limited to game development – meaning balancing and refining rules that had already been written, i.e. playtesting – we often had the chance to create brand new rules taking on the role of co-authors.

We felt the need of being recognised as such.

The first game that we signed, together with Alberto Barbieri, was Radetzky: Milano 1848, published in 2018 together with Demoelà. Since then, the name P.S. Martensen has appeared in almost all the games published by us.

But what is our contribution as authors?

The needs of every member of the “P.S. Martensen” team are different but go really well together (there isn’t one rule or any mechanics that get introduced without unanimous approval by all of the partners!) Mario is meticulously thorough at removing any exceptions to the rules. Mario believes that games should be fluid, with as little rules as possible, while respecting coherence and settings. Matteo’s job is to to minimize downtimes (between different turns) by finding solutions that can offer a good control for all the players during the opponents’ turns. Tambu comes up with varied and interesting solutions, he’s the innovative one. P.S. Martensen’s mission, hence the mission of all the team members, is the creation of elegant, neat and fluid designs.

What is the relationship with Post Scriptum and Placentia Game’s original games’ authors?

First of all, we would like to clarify one thing: even though we ask if we can sign the games if we deem it necessary, we do not take any cut off the original games authors’ percentage of the revenue. We respect their work and fully recognise their merits (at the end of the day, it’s them who had the initial genial spark).
Moreover, we always try to build a balanced relationship with the authors, working on the development together, playtesting and having continuous brainstorming sessions, leaving our notes on shared documents and talking in person. Their idea might end up being very different from the original, but we try to respect the spirit that brought to life the first creative intuition.
P.S. Martensen is also a way of conveying that the game has been developed with care and respecting the ideas of the original creator. A sort of warranty seal on the quality of the work.

What did P.S. Martensen create concretely?

We can talk about Wendake’s fight system, Florenza: X Anniversary solitaire mode, or Shogun No Katana’s Palace mechanic… but we prefer to talk about all this in the next articles of Inside the box – Game Design Diaries.
Subscribe to our Telegram channel not to miss any of Post Scriptum’s articles!