Shogun no Katana: our long journey to the top (of mount Fuji) 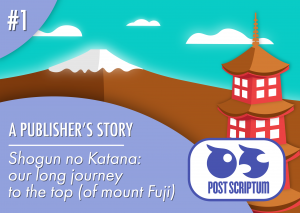 “If you aim high, you might reach above the clouds”
(Tambu San)

Shogun no Katana, by Federico Randazzo and P.S. Martensen, is our most ambitious project branded Placentia Games: an epic work that took 5 years of development alongside different projects, a massive kickstarter campaign with more than 2000 backers and approximately 150.000€ raised. We are more than happy with these numbers.
What made us believe so much in Shogun no Katana and invest so much time in it?
The reason why we fell in love with this game was that every idea, since the very first draft, was oozing feudal Japan vibes, with fluid and elegant dynamics, like in Hokusai’s most fascinating works. Well, on top of the fact that we loved the game itself!
We wanted the players to feel like real katanas forger and to convey the essence of this noble art with ancient origins.
Aiming at holding this vision throughout the whole development, since the beginning we decided to give great value to our settings, providing every rule and every component with a philological meaning. Tambu carried out extensive research, studying clothes, tools, and dynasties’ coats of arms, in order to make everything believable and respectful of the Japanese world. 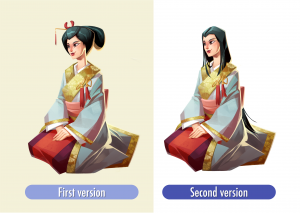 We needed some help for this challenge (because understanding the rich Japanese tradition is a Titanic effort!), so we asked Dai Kurahara, professor at Tokyo Denki University, expert researcher of Japanese documents, with a great passion for war games, and Silvia Teodora Vallerga, who graduated summa cum laude with a master’s degree in the history of Japan and who currently lives in Tokyo. Thanks to Dai and Silvia we avoided mistakes that would compromise the setting credibility: for example, we edited our noble women’s illustrations, because we had drawn them with their hair tied up, as Western people tend to imagine Japanese women, but historically, it was actually compulsory for women of high status, to keep their hair down. Moreover, we received precious advice for the selection of the four main resources for the creation of katanas. 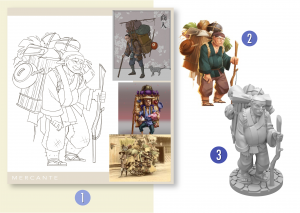 Considering this philological process, it might seem weird that the idea of adding miniature statues came up only halfway through development: it was Federico Randazzo himself, during a gaming exposition, who thought about changing the original wooden components with miniature statues.
This turned out to be the last missing piece that make Shogun no Katana complete: the original tokens did not do justice to Giorgia Lanza’s meticulous work, the illustrator who found the perfect balance between modern taste and traditional style. We had to make the game characters such as the Monk, the Geisha and the Samurai more real.
When the Kickstarter campaign was about to start, we decided to stop everything and take more time to face this challenge.
But this is another story, we are going to talk about it in the next article 🙂
We cannot know if players will love Shogun no Katana as much as we do. But one thing is sure: we have put in all the energy and all the effort to finish it, perfect it, make it polished and elegant, both in terms of gameplay and the experience. We hope that whoever decides to dive into the Far East to craft and polish the legendary katanas will feel all this. For us it was certainly a long journey that made us grow and find new potential – in the world of board games but also in our inner world. 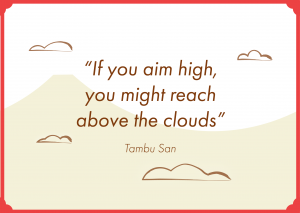